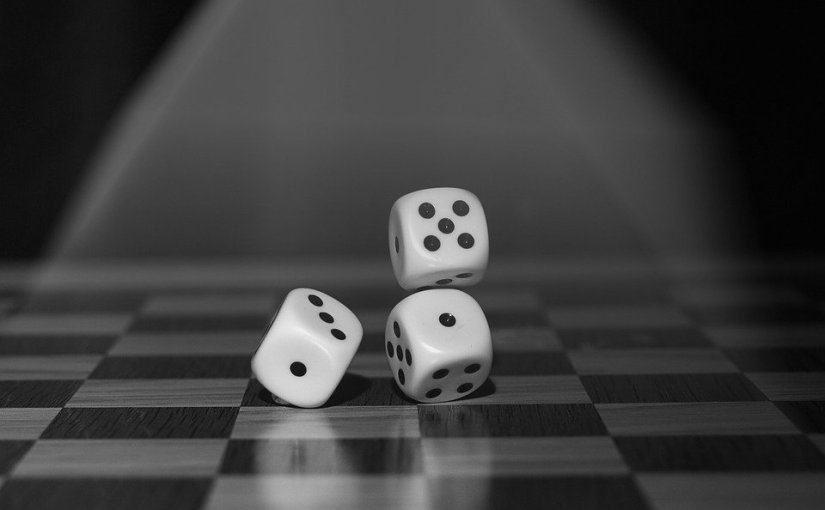 It follows this month’s goals that I invest in both making games and in family. This week, I did both!

This post has lessons for being a Game Moderator, or GM (referred to in the massively popular role-playing game Dungeons & Dragons as DM) and impromptu game-playing. However, I want make special note of just how much fun my sister, her partner, and I had with nothing more than two dice, a prompt, and our imaginations 😁

Try the following yourself sometime and have a great day! 👍

2d6. Or, two six-sided dice, are what’s rolled. Only the GM rolls dice when the outcome is uncertain or the attempt could be dangerous.

3-5-7-9-11 difficulty. Difficulty starts at 3 for very easy (this should hardly, ie never, be used; the player should just be able to do it), 5 for easy, 7 for moderate (the default if no difficulty specified), 9 for hard, and 11 for very hard. The GM bases the difficulty off of the game’s context, the player’s ability, and the action or actions trying to be done.

Roll at or above to succeed. Meet or above the difficulty to do the things intended.

Critically succeed or fail. When the 2d6 both have the same face value (eg 2-2, 5-5), consider that a critical. It’s a success or failure if the total value of the 2d6 is above or below the difficulty, having especially positive or especially negative consequences.

Two to six players, one being GM. You need a handful of players (two to six-ish), one being the GM. Players work together to clarify and act in the game’s story. The GM describes the environment and outcomes, rolls dice, presents obstacles, answers other players’ questions, and asks what the players are doing (this buys the players time to think of their next actions).

Non-GM players are themselves in the game. To judge how well they might do something, the players are asked about their past experiences and current abilities when such things might help them accomplish what they want.

Let the details reveal themselves. Whether defining a player’s character or the game world, let the specifics be asked for when they’re needed. This saves time and trivia. Want to know where the exits in a room are? Ask if there are any. Need to know if a player is strong enough to lift something? Ask for their experience and past examples of doing similar.

Let the very likely happen. If something is very easy, or if it involves nothing but the character themselves, those in the game story do it without needing to roll the dice. This goes for having certain items and being knowledgeable about certain things that the player would very likely have or know.

Talk it out. Again, as a player, ask for details and talk among yourselves. If unsure what intentions are, what something looks like, where things are, or how actions would be carried out, ask and talk it out. As a GM, you also don’t need to describe absolutely everything, either; ask players for how they commit their successes, where they were before, and what they’ve done previously.

Give a prompt. The GM can start the game off with the famous The Orc and the Pie game prompt from Monte Cook: “You see an orc with a pie. The room is 10 feet by 10 feet” and “what are you doing?” Regardless of prompt, it should have implicit or explicit obstacles to get around and goals to attain in a place.

Players roll their own dice. This though seems to slow things down. One person rolling (the GM) and reviewing the values is faster, especially since the GM determines the difficulty and any additions or advantage the players have. (That, and you need more dice!)

Players are someone else. Depending on the game wanting to be played, players can be lousy pirates 🦜 superior ninjas 🐱‍👤 bug squashing space marines 👾 or anything in between, original or taken from a popular story world. Being generic as possible helps here, but the bare minimum is that all players are familiar with trope.

Add or subtract from rolls. A roll may be given +1, +2, or -1, -2 for the abilities of the player in the context of the game world, such as being weak (usually a negative) or comparatively large (usually a positive). This was tried for awhile, but arithmetic usually slowed things down, it being better to give harder or easier difficulty instead.

Roll for who goes first. This is commonly called “initiative”, which determines which characters act first. When playing, I did this for the first conflict, yet that was over very quickly. As the game went on, we skipped initiative, instead giving each player and fictional character near-enough equal time in the spotlight to try something, moving on to other characters once they were done.

Have you done something similar? I want to know! The improvised game played was something I want to do again. Heck, I may (after the current pandemic passes) carry dice with me at all times just for the possible opportunities 😃

One thought on “Improvised Role-playing Game”