Been thinking and working a lot on tabletop roleplaying games (TTRPGs). In that work, I’ve needed to understand what’s necessary for making TTRPGs since my work concerns a universal simplification system that keeps the game’s original mechanical balance.

So, for your next dungeoneering adventure, you making your next great game, or if you only have a packet of note cards, keep five things in mind: You (your character), Seem (your external disposition), Story (your history), Stuff (your, ah, gear!), Status (your health, experience, etc).

Going into those things in depth, keep in mind that all of the following can be recorded on one side of a 4×5 note card. I’ve pictures as examples, though these have been made game-specific for the Warhammer 40K Deathwatch TTRPG:

Your character and all the important things needed to keep in mind when interacting in the game. Name, stats, any special abilities, and some reminders of IP-specific values. This card shouldn’t change during play, and rarely between sessions of play. 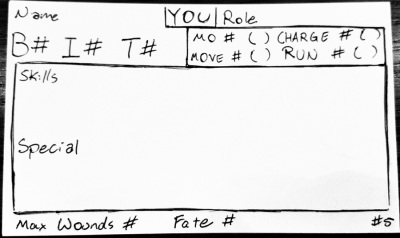 Role
A reminder of your role in society or the game world.

BITS
The Body-Interaction-Thought values that are added to your rolls.

IP-Specific
In this case, Movement (half, full, charging, sprinting).

Skills
Anything you can do in particular.

Special
Special abilities or considerations in what you do.

Other IP-Specific
Anything else. In this case, max health and don’t-die points.

Your character’s external appearance and behavior. This card also shouldn’t change much, unless a scar or some terrible incident has come about!

Appearance
What do others see?

Your character has a past and a future. Here those goals and history get recorded. If the game IP warrants it, include the relationships the character has to people, places, and things. This card can change during play, especially if keeping a log of the character’s actions. (This may require additional cards / space!) 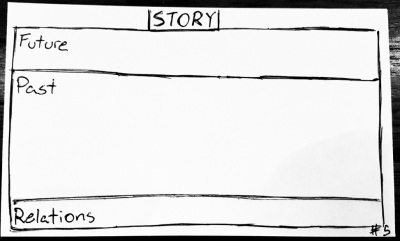 Future
Your goal(s), what you aim to do, how you’re driven to act.

Relations
Optional as it’s IP-specific; how you and others relate to one another.

It’s dangerous to go alone, so what are you taking along? Carrying and wearing, using and keeping, the gear goes on this changing card. 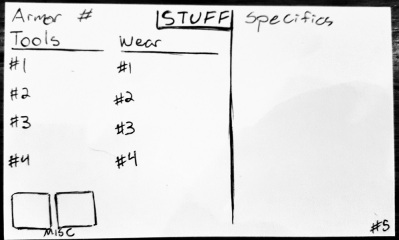 Armor #
How much protection what you’re wearing warrants.

Tools
A nicer word than than “Weapons”, but doesn’t alliterate 😑
Anything held or ready to be held.
Only ever carry 4 of these at a time; kept in the hands, on the body, or on the hips.
Since these can be changed often, best to keep the details of the tools on other cards.

Wear
Typically the suit worn, maybe your pack, and a few pieces of other gear.

Misc
A count of the miscellaneous items that you’ve packed.
Is abstracted to keep down bookkeeping.

Ammo (IP-Specific)
Sometimes ammunition kept in a magazine needs special attention.
Also is abstracted to save on bookkeeping.

Specifics
Any items carried along that you have a definite amount of.

How your character is should be changing constantly throughout play if anything of worth is being done. Health, progression, and conditions are added and removed on the regular, possibly needing to replace this card multiple times during a single play session.

Health #
Health (thinking of renaming this to “Wounds” or “Harm”) followed by the total capacity for harm you have.

BITS Growth (ie Level Progression)
Add progression clocks or ticks (this latter is cleaner) to level up each of your attributes separately (or all at once if using an XP-pool system like D&D).

Conditions
Are you sick? Under the influence? Jot the name and a shorthand for effect here.

Processor of data, applier of patterns, maker of games and stories. View all posts by Jimmy Chattin

One thought on “Character Sheet Essentials”